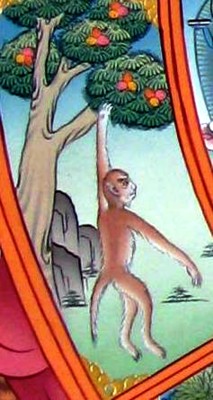 A monkey swinging in a tree, the image for consciousness in the Wheel of Life

Six consciousnesses (Tib. རྣམ་ཤེས་ཚོགས་དྲུག་, namshé tsok druk, Wyl. rnam shes tshogs drug) — the mind is often explained in terms of 'main mind' (Tib. གཙོ་སེམས་, gtso sems) referring to the six or eight types of consciousness, and the mental states (Tib. སེམས་བྱུང་, sems byung) , which are often given as a list of fifty-one. The six types of consciousness are:

There is a very good example illustrating the difference between these two which appears in a verse by Sakya Pandita:

The sense consciousnesses are like a dumb person who can not talk but who can see. They see everything completely, but can not say that things are good, bad, like this, or like that. The conceptual mind is like someone who is really good at talking—a real ‘sweet-talker’—but who is completely blind and can not see anything at all. The mind consciousness does not actually see forms.

To explain the difference between conceptual and non-conceptual, we can use the example of seeing a cup. First of all we see the cup, which is a non-conceptual perception. The eye sees the cup and in that instant there is mere seeing of the cup. There is no analysis, no evaluation or judgement of it as good or bad. Then it is as if the sense consciousness sends a report of what it has seen to the mental consciousness. The mental consciousness then gets involved in all kinds of speculation about the cup: Is it a good cup or a bad one? Where did it come from? Who bought it? How much was it? What is the design like? Do I like it? and so on.

To give another example, when the mind is distracted by an object that provokes intense desire, like a really attractive person, if we are just thinking about that person, then even if our eyes are looking at the cup, we will not be thinking about what the cup is like, and whether it is good or bad. Even if our eyes are seeing the cup, our mind might be daydreaming about this person very vividly, so that even if something were to happen in front of us we would not really notice.

This mental consciousness can only have one thought at a time. The sense perceptions can all arise at the same time. If you go to watch a movie at the cinema, you will see the film and hear the soundtrack, and then if there is a woman nearby wearing perfume, you might smell that, and you might also be eating popcorn. Then if someone touches you from behind there is also the sense of touch. So all five are happening at the same time. But the conceptual mind can not experience two thoughts simultaneously. For example, we can not think “I like it” and “I don’t like it” at the same time. But the conceptual mind is changing from one moment to the next. And it moves very quickly. Together with the eyes, it sees forms. Together with the ears, it hears sounds. Together with the nose, it smells odours. And it is moving about from one moment to the next. It is like a crazy monkey moving around inside a house with five windows. It is moving about so quickly that if you look from the outside it can seem as if there are five monkeys, but there is only one.