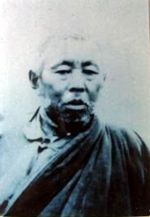 Patrul Namkha Jikmé was the seventh son of Dudjom Lingpa. His direct brothers are Tulku Lhatop and Tulku Dorje Dradül.

In his outer autobiography, Dudjom Lingpa recounts how he was told by his primary protector that Patrul Rinpoche will reincarnate as one of his sons[2]:

In 1887 [while I was 53], I gave teachings in Bochung Tashul’s home. During this time I wondered, “Is my homestead well?” Nöjin Shenpa Marnak, Dark Red Noxious Spirit Butcher, appeared in a dream one night. […]. [He] arrived in front of me proclaiming, “If you have something you don’t know or understand, I will tell you all about it. I asked, “Is my family well?” He told me, “They are well. This year Palgé Tulku, Glorious Virtue [Patrul Rinpoche], is going to come again.” I said, ‘Ah, Palgé Tulku has passed away. He’s not here.” “He passed away, and he’s not here, while at the same time he will appear once again. In the last autumn month you’ll meet him.”

Patrul Namkha Jikmé was recognised by Dza Tsamtrul Rinpoche Kunzang Dechen Dorje (Pema Kunzang) and Dudjom Lingpa as an incarnation of Patrul Rinpoche, and enthroned at Dzagyal Monastery, in Dzachukha, where his previous incarnation had formerly resided, and where he went to live.

In his outer autobiography, Dudjom Lingpa recounts how he was foretold by a dakini precisely when he had to let his son be enthroned at Dzagyal Monastery[3]:

In the year I turned fifty-seven [1891], at night on the fifth day of the second month, a dakini called Zulu Men sang to me,

In the first autumn month of this year
Some people will appear from the highlands:
They will come to invite Palgé Tulku [Patrul Namkha Jikmé]]
Such envoys will twice arrive—
Until the Sheep Year is underway
It’s not the time to enthrone him.
The Mamos and the Dakinis will postpone the event until then.
Do just as the envoys request.
Since it is of great significance, don’t refuse them.
If there’s any way he can be granted the investiture on the throne,
He will be capable of working for the welfare of beings.

In his outer autobiography, Dudjom Lingpa recounts moving to Dzagyal Monastery for the enthronement of his son[4]:

His main dharma heir was his own daughter, Khandroma Kunzang Wangmo, a great-daughter of Dudjom Lingpa.