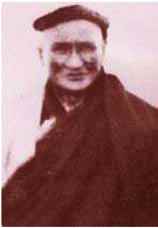 Tulku Dorje Dradül aka Tulku Dordra (1891-1959) was a son of Dudjom Lingpa and of Akyabza Kalzang Drönma [1] who became a major Dudjom Tersar lineage holder, and a successor of his father's activity at Dartsang Kalzang Gompa.

According to the biography in his Collected Works, in the time of political revolution, when he was traveling in Serthar, Sichuan Province, he was subject to "struggle sessions" back in his home monastery, where he would have been publicly humiliated. Consider the struggle session would make his disciples lose confidence and break samaya, he passed away on the way of escorting, in the morning of the 12th day of the 10th Tibetan month, Earth Pig Year (Dec. 11, 1959).