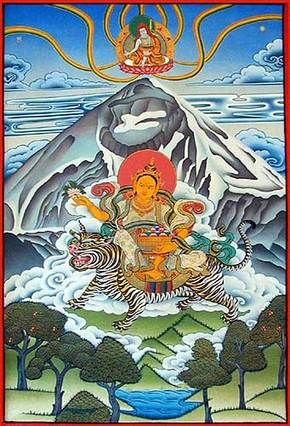 The goddess said to inhabit the slopes of Mount Everest, aka Chomolunga, is Miyo Lang Zangmpa. She is one of five sisters who are associated with mountains, often above sacred lakes, along the Nepali-Tibetan frontier. The leader of these five sisters is call Tseringma whose home is Gaurishankar to the west, a stunning peak that is sacred to Hindu as well, especially in Kathmandu. The “Five Sisters of Long Life”, as they are known, are only minor deities; the peak sits at the heart of Khumbu, a hub whose spokes are the valleys that radiate out from it. This mountain, in a way, holds the collective soul of the Sherpas, a repository for their of identity. According to legend, Miyo Lang Zangmpa was one of a group of wrathful Bön deities, the srungma, who was subdued by the evangelizing zeal of Guru Rinpoche to act as a servant of Buddhism. Miyo Lang Zangmpa’s character became that of a generous benefactor and she is always depicted in the act of giving. Sherpas on Everest go out their way to keep on her good side; offensive smells, such as roasting meat or burning garbage, and morally questionable behavior van provoke her wrath. Before every expedition they will hold a puja, building a lhap-so, which is a kind of altar, and stringing up lines of prayer flags to bring good luck. Murals at monasteries on either side of the mountain show Miyo Lang Zangmpa as a golden goddess riding a tiger and holding a bowl of tsampa and a mongoose that spits jewels. Her role as a bringer of wealth or resources to those who honor the mountain is clear. The translation of her name is less absolute. The scholar Edwin Bernbaum translates it as the “Unmovable Goddess Who Is a Benefactress of Bulls”, the bulls being yaks. Trulshik Rinpoche, the former head lama of Rongpuk Monastery who resided in exile at Thupten Chöling near Junbesi in Solu Khumbu, says her name means the “Unshakeable Good Elephant Woman”.[1]