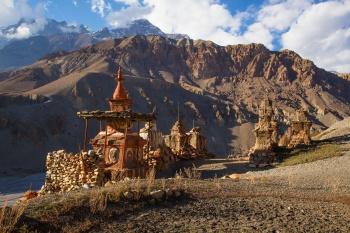 Pema Chödzong (Wyl. pad ma gcod rdzong), the 'Lotus Chö Fortress', is the name of the little Gompa, and house, founded by Lama Kadak in Dolpo, in Nepal, which became a practice place of the Namkha Khyung Dzong Tradition, a sub-tradition of the Dudjom Tersar.

Pema Chödzong is located in the impoverish region of Dolpo, (Tib. དོལ་པོ ), a high-altitude culturally Tibetan region in the upper part of the Dolpa District of western Nepal, bordered in the north by Tibet.[1].

At the begining, Pema Chödzong was just an inhabited cave.

In the late 1930’s or early 1940's, Lama Kadak did a Tröma Nakmo (Dudjom) retreat in the cave, and the local people of all the surrounding villages requested him to say as a ngakpa, and offered him the cave. After some works, a house with a temple in it was built. Pema Chödzong is at the base of a rock-cliff — the foot of the cliff serves as one of the stone walls of the structure. All around, they are wild white roses, which smelled divine.[2].

The place is still owned by Lama Pema Dorje’s family, but is no longer in activity.