In September 2000, Rigpa had the great honour, at the head of the Association Golfe du Lion, of inviting His Holiness the Dalai Lama to visit Lerab Ling, their international centre in the south of France, and to give a major Buddhist teaching. Taking place in the millennial year, the sixtieth anniversary of His Holiness’s enthronement and fiftieth of his assumption of the rule of Tibet, his visit came as a special blessing. We are happy to bring you this brief report of a series of remarkable events, all of which were dedicated to peace throughout the world.

The Drupchen Practice at Lerab Ling 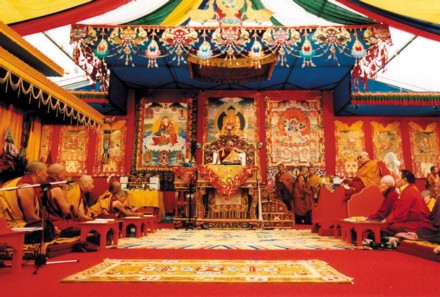 His Holiness during the empowerment of Yang Nying Pudri, 19th September 2000, Lerab Ling

For two weeks prior to His Holiness’s arrival, thirty of the seniormost monks from the Namgyal Monastery —the Dalai Lamas’s own personal monastery—led by Garje Khamtrul Rinpoche and their abbot Jadho Rinpoche, conducted an intensive vajrayana practice at Lerab Ling never performed before outside Tibet or Dharamsala in India. This was the complete drupchen and mendrup of Vajrakilaya, according to the Phurba Yang Nying Pudri, the terma revelation of Tertön Sogyal Lerab Lingpa, who was the previous incarnation of Sogyal Rinpoche and a prolific discoverer of the spiritual treasures of Guru Padmasambhava.

Entrusted by Lerab Lingpa to the thirteenth Dalai Lama at the turn of the last century, this practice is maintained to this day by His Holiness the Dalai Lama and his monks in the Namgyal monastery. The drupchen, which includes sacred dances and the creation of a sand mandala, was attended by five hundred of Rigpa’s senior students, and took place in a large tent, decorated magnificently like a temple, on the site of the future temple at Lerab Ling. In the mendrup, five hundred kilos of amrita were produced, containing countless sacred and medicinal substances gathered from masters and monasteries all over the Himalayas.

On his arrival at Lerab Ling on September 17, His Holiness the Dalai Lama was given a full ceremonial welcome by Sogyal Rinpoche, Khamtrul Rinpoche, the Nechung Oracle, a number of geshes and lamas, Sogyal Rinpoche’s mother, the Namgyal monks, representatives of the Rigpa Sangha worldwide, and all those attending the drupchen. On the following morning, he took part in the final session of the drupchen, ‘the receiving of the siddhis’, during which he blessed the amrita. His Holiness confirmed how auspicious this extraordinary event had been, while Kyabjé Trulshik Rinpoche called it “perfection upon perfection”.

On September 19, His Holiness conferred the empowerment of Lerab Lingpa’s revelation of the Phurba Yang Nying Pudri at Lerab Ling, in an event of immense historical and spiritual significance. Headed by Kyabjé Trulshik Rinpoche, one thousand four hundred people received the empowerment, including lamas, geshes, monks and nuns, practitioners from all the Rigpa centres around the world, selected members of other centres in Europe, and certain of His Holiness’s close friends and Tibet activists who had been specially invited. His Holiness spoke of the historic connections of this practice, and its importance for the flourishing of the Dharma, the Tibetan people, the Tibetan government and his own long life. At the end of the empowerment, those present viewed the sand mandala, which was then dissolved and poured on the following day into the stream at Lerab Ling.

The Path to Enlightenment, Lerab Gar 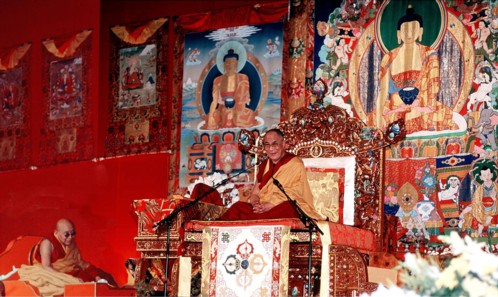 Up to ten thousand people attended the Dalai Lama’s five day teaching on ‘The Path to Enlightenment’, fifteen minutes from Lerab Ling, at a site which was gven the name Lerab Gar. An enormous teaching tent stood surrounded by other tents housing restaurants, information, organizations, publications, a Rigpa exhibition, services and press. With consummate skill, His Holiness presented the basic principles of the Dharma—including the four noble truths, the two truths, interdependence, the nature of consciousness, refuge and the bodhisattva vow—and began to give a commentary on the omniscient Longchen Rabjam’s ‘Finding Comfort and Ease in Meditation’ from the Ngalso Korsum trilogy, which he was inspired to teach on because of its special significance for this occasion. Many of the lamas, already struck by the depth and relevance of His Holiness’s teachings, were amazed that he had chosen such a profound text on which to comment.

He then conferred the empowerment of Padmasambhava and his Eight Manifestations (which he granted at Rigpa’s request in 1982 in Paris and 1989 in San Jose) from the pure visions of the Great Fifth Dalai Lama. On the final morning of the teachings, Kyabjé Trulshik Rinpoche led everyone present in a moving and intricate long life ceremony for His Holiness called ‘The Excellent Vase of Nectar of Immortality’. This offering ceremony, marking the sixtieth anniversary of His Holiness’s enthronement, was conducted with the same authenticity and completeness as in India, and concluded a week-long practice for His Holiness’s longevity by the Namgyal monks.

Seventy percent of the audience for the teachings came from France, and the rest from twenty-one different countries, and from as far away as Australia, USA and Canada. There were over a hundred lamas and geshes with their assistants, monks from the Namgyal, Gomang and Gyutö monasteries, two hundred western monks and nuns, a hundred friends of His Holiness and Tibet, a hundred handicapped people, a hundred members of the press, three to four hundred volunteers, and two hundred people from the surrounding villages who attended the teachings for a day.

Several other events took place around the teachings: Kyabjé Trulshik Rinpoche welcomed everyone and gave a blessing; Sogyal Rinpoche introduced the lamas to the audience; the work of the International Campaign for Tibet was presented by Lodi Gyari Rinpoche, Richard Gere and Tsering Jampa; a unique archive film documenting lamas who have taught over the years at Rigpa’s centres and retreats was shown; and a brief presentation of Rigpa’s work was made to His Holiness. In a special consecration ceremony at Lerab Ling, he blessed five vases for the temple, and met the local mayors as well as Rigpa’s directors and main instructors. He stressed how Lerab Ling represented authentic Tibetan Buddhist culture, and would play a role in furthering understanding with other religious traditions. He assured everyone of his involvement and guidance as Rigpa continues to evolve; “as a tiny follower of the Buddha,” he said, “I want to express my appreciation for all your work”.

His Holiness then took part in an inter-faith gathering in nearby Lodève, his presence bringing together the Catholic Bishop of Montpellier, the regional president of the Protestant church, and the rector of the mosque in Paris in what was a milestone in inter-religious understanding for the area. In Montpellier, His Holiness visited Kagyü Rintchen Tcheu Ling, and met the mayor of the city and the Préfet of the local region. He then gave a public talk to over five thousand people, where he was received with tumultuous enthusiasm as he spoke on ‘Peace of Mind, the Source of Happiness’.

All in all, these events outstripped everyone’s expectations. A number of propitious signs accompanied the drupchen, and indicated its complete success. At various points, His Holiness also remarked how auspiciously everything was proceeding; he said he was enchanted by the natural surroundings and blessed environment of Lerab Ling; and he seemed inspired throughout. Many maintained that it was unlike any other event with His Holiness the Dalai Lama they had ever attended, both in terms of the profoundness of the teachings and in the care and attention to detail shown in the organization. With the biggest audience to date for a Buddhist teaching by His Holiness in France, news of Lerab Gar was broadcast as far away as Korea and Tibet. For Rigpa, this event occurred during the twenty-fifth year since Sogyal Rinpoche started to teach in the west and Rigpa’s work began, and it was the largest they had ever organized. It came ten years exactly after Kyabjé Dilgo Khyentse Rinpoche gave the most important Dzogchen transmissions, in the last year of his life, at Rigpa’s summer retreat at Prapoutel, near Grenoble in France. And it was exactly one hundred years, in the very same week according to the Tibetan calendar, since Lerab Lingpa revealed the terma of Tendrel Nyesel, the principal practice of the Rigpa Sangha. With the historic significance of the empowerment and drupchen of Lerab Lingpa’s Vajrakilaya, what took place over these ten days in Languedoc will remain forever a turning-point in Rigpa’s history, and an unforgettable blessing, inspiration and encouragement for their endeavours in the future. For France, this visit by His Holiness witnessed a deepening and maturing of the interest in the Buddhist teachings. His Holiness himself and others commented on the rapt attention and appreciativeness of the audience, despite the arduous weather, who frequently applauded, and at the end rose in a long, standing ovation. For Europe and beyond, these events underlined, with a new sense of gravity, the respect that Buddhism has increasingly won in the modern world, as a great source of wisdom, offered with no notion of conversion, but simply to benefit human beings and bring them ever closer to their ultimate nature.

“I am very happy that here, at Lerab Ling, a centre has been born which is destined to make Buddhist culture, as developed in Tibet, known in an authentic manner. For what counts is that it is an authentic representation of Tibetan Buddhist culture, and so can provide an example, and bring about intercultural exchanges in France and in other places. I am convinced that this centre at Lerab Ling is already making a contribution and will continue to do so, more and more, towards a greater knowledge of the rich culture of the Tibetan Buddhist tradition."
--His Holiness the Dalai Lama