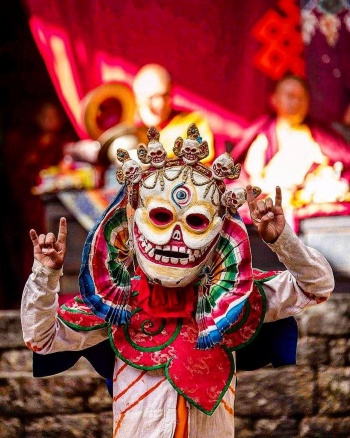 Mani Rimdu (Wyl. ma ni ril sgrub) is the name under which the drupchen of the Thukjé Deshek Kundü is practised in the Mount Everest area.

Mani Rimdu belongs to a Tibetan ritual known as Rildrup (Wyl. ril sgrub), pill practices. The name Mani Rimdu is the Sherpa pronounciation of the Tibetan term Mani Rildrup (Wyl. ma ni ril sgrub, the practice of Mani pills. The species of mani-pills rituals, which are dedicated to Avalokiteshvara is not unique to the Mount Everest region.

The three-day celebrations of Mani Rimdu follow the ten days of non-stop prayer sessions addressed to the patron deities seeking blessing from the god of all mankind. The deity propitiated is Guru Rinpoche. The ceremony begins with the blowing of horns in the afternoon after which the abbot of the monastery accompanied by other monks chant prayers. The congregation is blessed and given holy water and auspicious pellets for good luck and longevity. An orchestra of cymbals, horns, flutes, and conch shells announces the start of the second day's celebrations. Monks in colorful robes and huge glowering masks perform dances symbolizing the destruction of evil. On the last day, tormas (figures made of dough) are consigned to a sacred fire. This implies the end of negative forces and the advent of a blessed new year.

During the Mani Rimdu, the ritual of the protectors is found in a text called The Playful Ocean of True Achievement (Wyl. dngos grub rol mtsho). Like nearly all the ritual texts of Mani Rimdu, the Playful Ocean originated at Mindroling Monastery. The Playful Ocean is quite similar to the main protector ritual of the Dudjom Tersar lineage, the phrin las rnam rol, The Play of Ceremony. Sometimes the two texts correspond word-for-word. According to the commentarial tradition of the Precious Lamp (Wyl. rin chen sgron me), the protector ritual to be used in connection with Thukje Deshek Kundü is the Guardians of the Word (bKa’ srung), a short text centering on Lhachen (Great God). Lhachen, aka Mahadeva for the Indians, is considered by the tradition to be an emanation of Lord of the Dance and the special guardian of the word of his teachings. The Playful Ocean is the protector ritual usually used at Thubten Chöling when performing the rituals of Lord of the Dance. Presumably, it became a fixed part of Mani Rimdu when the festival was first codified by Ngawang Tenzin Norbu, aka the Tenth Dzatrul Rinpoche. 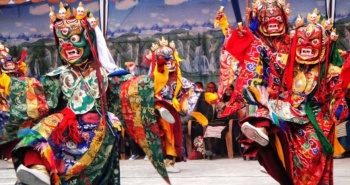 Although often casually identified as a “Sherpa festival”, Mani Rimdu began at Rongpuk Monastery in Tibet in the early 1900’s, at the initiative of Ngawang Tenzin Norbu, who had studied in Mindroling Monastery, in Central Tibet. Like much of Rongpuk Monastery practice, most of the rituals that comprise Mani Rimdu find their source at Mindroling Monastery, the great Nyingma monastery in Central Tibet. Rongpuk Monastery, on the north face of Mount Everest, was an influencial force in the efflorescence pf Sherpa monastic culture earlier in this century[1] In a way, Rongpuk Monastery served as a substation in the transmission of the Mindroling lineage, collecting and reassembling its traditions and then sending them over the Nangpala pass to the monasteries of Solu Khumbu just a few days journey south. 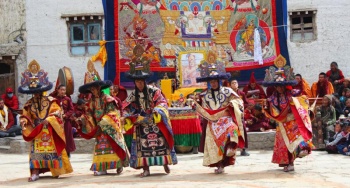 While in exile in Nepal, since 1959, Trulshik Rinpoche established an annual Mani Rimdu drupchen in Thupten Chöling, on the southern slopes of Mount Everest.

In the 1980’s-1990’s, Richard J. Kohn worked on a university research focused on the Mani Rimdu. The Mani Rimdu festival is performed in the Sherpa and Tibetan monasteries of Solu Khumbu District in the Everest region of Nepal: Chiwong, Thami, Tengboche Monastery and in a somewhat different form at Thupten Chöling[2]. Nowadays, Mani Rimdu is the biggest event of the year for the Sherpas of the Khumbu region.