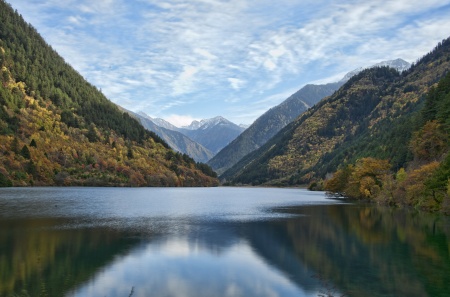 Located in the remote northwest part of Sichuan Province, China, Ngawa is on the border with Qinghai (to the northwest) and Gansu (to the north). The county seat is Ngawa Town.[2] [3]

Ngawa county is located in the easternmost part of Golok and shares borders with Chikdril (Tib., Wyl. gcig dril) in the north, Pema Dzong (Tib. པདྨ་, Wyl. pad+ma) in the middle and Dzamtang (Tib., Wyl. ‘dzam thang) in the south of Golok. To its very south is Barkham aka Maerkang (Tib. འབར་ཁམས, Wyl. ‘bar khams) county, home to the prefectural capital of Ngawa Tibetan and Qiang Autonomous Prefecture. Its Northern borders are flanked by the Ma Chu (Tib. རྨ་ཆུ, Wyl. rma chu) and Dzöge (Tib., Wyl. mdzod dge) counties, as well as Mewa (Tib. རྨེ་བ་, Wyl. rme ba) county, that are part of the southwestern Gannan Tibetan Autonomous Region (Gansu Province) in East Amdo. The central and southern areas of the district occupy the Nga Chu (Tib. རྔ་ཆུ་, Wyl. rnga chu) and Mar Chu (Tib. སྨར་ཆུ་, Wyl. smar chu) river valleys which meet in the south of the district.[4] 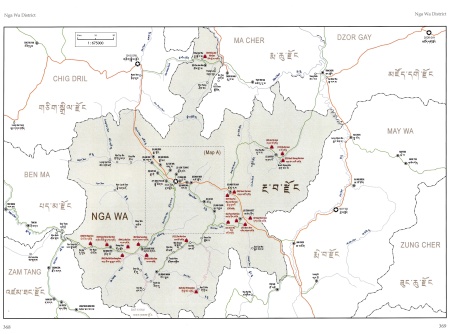 Map of Ngawa, courtesy of Stewart Smith, The Monasteries of Amdo, Volume 1: East and South Amdo, 2017.

The main cities of Ngawa county are the following:

It is reported that already during the reign of Tibet's King Trisong Detsen in the 8th century, the great translator Vairotsana visited the Gyalrong area. In 1410 Tsongkhapa Lobzang Drakpa's student Tshakho Ngawang Tapa established the first Tibetan Buddhist Gelug school monastery in the area, called "Gyalrong".[23]

Nevertheless, from the perspective of the people of Central Tibet, Ngawa seemed to constitute an area devoid of religious attainments but it actually was and still is one of the most important centres in Amdo, not only due to its impressive numbers of monasteries and temples, but also because of the large variety of Tibetan Buddhist schools represented there. As the prime example, the Bön tradition has a vivid religious life in Ngawa and surrounding areas, so the south-eastern corner of Amdo—together with the north of Gyalrong—forms one of the two main strongholds of Bön religion in today’s Tibetan areas. Ngawa also provided shelter for the almost extinct Jonang school. For long, Ngawa was inaccessible to foreign travellers and explorers, and was apparently avoided by Tibetans, other than those from the fierce Ngawa and Golok Serta tribes. This was mainly due to the rather martial attitude of that area’s population. Not only had some of the few foreigners who tried to get in lost their lives, but their Tibetan guides and porters were usually much too afraid to approach the region, and refused to do so. At the end of the 19th and early 20th century, Ngawa Tsenda was ruled as an independent princedom by two chieftains who were brothers. As the chief (gyalpo) of Ngawa Metsang had robbed merchants from Songpan, the commander of the Chinese garrison in Songpan sent a punitive expedition to Ngawa in 1902. The troops returned unsuccessful, and thus a second, better equipped army, was detached the year after. This time they had some results through mediation by a dignitary of the neighbouring Gyalrong’s Merge Gompa; peace and compensatory payments could be negotiated but the belligerent did not change afterwards, since the region stayed virtually inaccessible until the mid-20th century, when the quasi-independent time of the ferocious tribes was followed by the seclusionist period of communist China.[24]

Ngawa county is named after the Nga Chu tributary of the Mar Chu, which flows south from Nyenpo Yutsé. It is an area where nomadic groups and long-established settled communities intermingle. The villages are characterized by large detached adobe farming houses with tapering walls and windows all on one side of the building. Agricultural produce is limited to valley floors and alluvial fans, where fields or barley, rapeseed and beans are planted, but it is animal husbandry and forestry that provide the principal economic outputs. The town of Ngawa itself has grown extensively in recent years. It is a vitally important and thriving trading town, with scenic hill-top panoramas. As is the case in Dzamtang and Serta, the forested hills on the upper reaches of the Nga Chu tributaries have proved easier to log than the gorges further south, and many hillsides were stripped bare prior to the 1998 ban on logging.[26]

Ngawa’s religious landscape is predominantly influenced by the Geluk school[27] The tradition lineages practised are those related to: