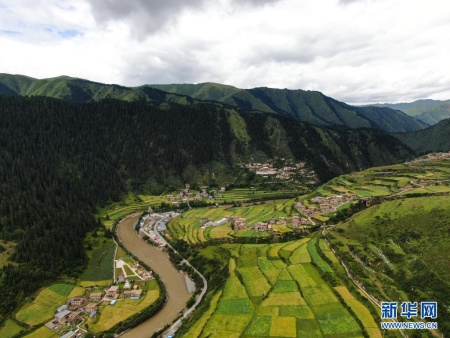 It is one of the most beautiful parts of Tibet. It lies south of the watershed range that divides the rolling grasslands of the Ma Chu (Yellow River) from the forested gorges of Gyalrong. Specifically, it occupies the upper reaches of the Mar Chu and Do Chu rivers. It is a county of south-eastern Qinghai Province, China, bordering Sichuan to the south.

Pema is the southernmost county-level division under the administration of Golok Tibetan Autonomous Prefecture. It is often thought of as the home of the wild Ngolok tribes feared throughout Tibet. The county is a sanctuary for protected wild animals such as white-lipped deer, leopard, snow leopard, pheasant, and golden eagle.[2][3][4] 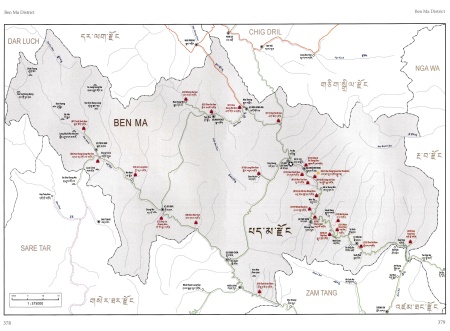 Map of Pema, courtesy of Stewart Smith, The Monasteries of Amdo, Volume 1: East and South Amdo, 2017.

Pema is a mountainous region with overlapping peaks, rivers, deep valleys, small grasslands and narrow river valleys. The altitude is about 4000 – 5000 meters. The main peak of Duoniang Mountain is 5,050 meters above sea level. Its terrain is relatively large with a slope of 40-60 degrees, and even 80 degrees at the maximum. The air is thin making it difficult to climb.

Pema County has a continental plateau climate, and temperature decreases with increase in altitude. July has an average monthly temperature of 11℃, while the end of January has an average monthly temperature of -9.8℃. However, there is rapid heating, rapid cooling, and temperature drop often is greater than temperature rise. Average annual precipitation in Pema county is between 665 mm and 767 mm. Annual average wind speed is 1.7 m/s. Among those, average wind speed from March to April is relatively high, above 2.0 meters per second, and from July to January about 1.5 meters per second.[7]

The main cities of Pema County are the following:

In the valley of the Mar Chu river, which is 50 to 60 km long, about 45 sites of the Bronze Age were found certifying the early settlements within the Tibetan Plateau. According to historical records Tibetan farmers arrived to the region some 900 years ago and opened up the land for agriculture. Only three centuries later, the population had grown so much that some people had to become herdsmen and gradually taking possession of the vast grasslands in today’s Golok Prefecture. At that time, Buddhism started to spread among the Golok tribes (15th century). This early period is marked by activities of Nyingmapa teachers. More than a hundred years later, monks (and nuns?) of the Kagyü and Jonang found their way into the Goloks’ country with the Geluk latecomers not following until the mid-18th century. Pema county is different from the rest of the prefecture, not only because it owns some considerable expanse of forests in the southern valleys cutting into the highland steppes, but also for its cultural background. While most of the areas in Golok land were without monastic institutions until the 19th and even 20th centuries, Pema’s monasteries date back as far as 1493. The architectural features of the 23 monasteries are often extraordinary, and the large number of stupas of different shapes and sizes makes the valley of Pema a country of chorten. Long rows of these reliquary stupas and places of worship line roads and monasteries, seemingly numbering several hundreds, if not thousands, within the county bounds. Simply rebuilding and repairing the older sites did not satisfy the locals until they have set up new records. In 1996 a completely new monumental stupa was about half way to completion, probably exceeding 50 or 60 m in height. This huge structure at the lower end of Pema county seat, Selitang, is certainly the largest chorten all over the Tibetan Plateau, a single example of many more in the valley.[18][19]

Pema county is dominated by the Nyingma school, with the sole exception of a single Jonang and a single Kagyü monastery.