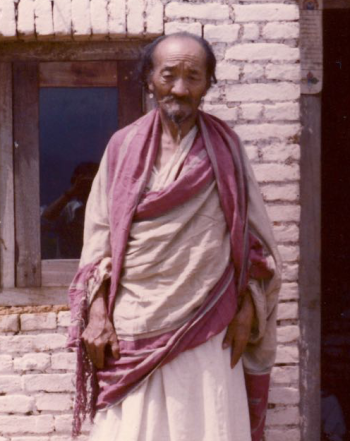 He was born in Tibet and first trained in the Taklung Kagyü tradition. When he was twenty, Lama Kadak went to Mount Kailash for an extended time of retreat. Around this time, he met Golok Serta Rinpoche, a disciple of Degyal Rinpoche (himself a direct student of Dudjom Lingpa) who had settled on the slopes of Mount Kalaish and established a community of practitioners in Namkha Khyung Dzong. He then became a heart-student of Golok Serta Rinpoche who trained him in the Namkha Khyung Dzong Tradition lineage of the Dudjom Tersar. From him, Lama Kadak received all the Dudjom Tersar lineage teachings and empowerments, and especially the main Tröma Nakmo (Dudjom) practice from the Dudjom Tersar Töluk tradition. From then on, Lama Kadak focused his practice on the Dudjom Tersar lineage for the rest of his life, and mostly practiced the main Tröma Nakmo (Dudjom).[1].

While still in Tibet, Lama Kadak met his wife Chöying Palmo, and had several children with her, including Lama Pema Dorje Rinpoche and Dawa Chödak Rinpoche.

Following the political events in Tibet in the late 1950’s, Lama Kadak fled to India in 1959, where he met Dudjom Rinpoche for the first time. Following this meeting, he became a main disciple of Dudjom Rinpoche and was later part of the Dudjom Tersar ngakpa practitioners established in and around Tso Pema Orgyen Heruka Nyingmapa Gompa.